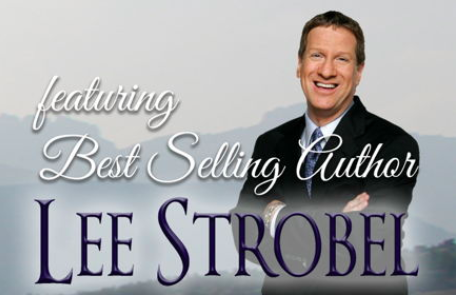 Atheist-turned-Christian Lee Strobel, the former award-winning legal editor of The Chicago Tribune, is a New York Times best-selling author of more than forty books and curricula that have sold fourteen million copies in total. He has been described in the Washington Post as “one of the evangelical community’s most popular apologists.”

He was educated at the University of Missouri (Bachelor of Journalism degree) and Yale Law School (Master of Studies in Law degree). He was a journalist for fourteen years at The Chicago Tribune and other newspapers, winning Illinois’ highest honors for investigative reporting and public service journalism from United Press International.

After probing the evidence for Jesus for nearly two years, Lee became a Christian in 1981. He subsequently became a teaching pastor at three of America’s largest churches and hosted the national network TV program Faith Under Fire. In addition, he taught First Amendment law at Roosevelt University and was Professor of Christian Thought at Houston Baptist University.

Through your past support, the Billings Christian School Education Foundation has purchased bleachers for the gym, iPads for technology education, a van to transport students, provided scholarships, implemented reading programs, and funded other beneficial student initiatives.

We thank you for your faithful contribution to Billings Christian School Education Foundation through prayer, service and financial giving.